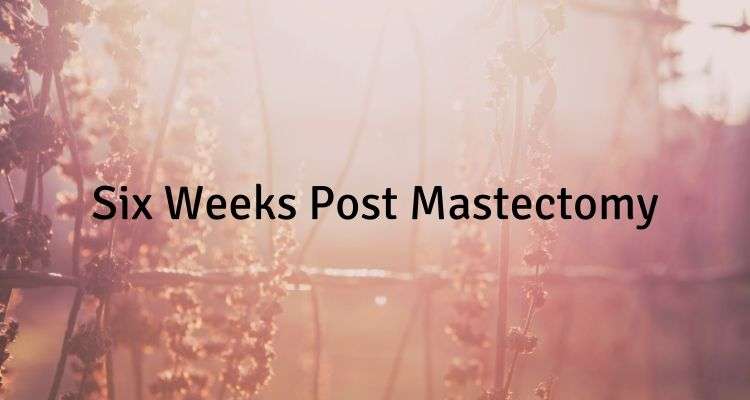 I couldn’t decide if I was going to write a six week update or wait a few extra days until I had my first fill done and post an update then, or do both – but in the end, I was travelling and working on the day of the six week milestone, so the decision was made for me – this is actually a six week three day update! Look out on another post on the fill very soon.

The six week point was significant because the restrictions regarding movement had to be followed until then. The main restriction was I was not to lift my arms above shoulder height. But I was also meant to be careful with pushing and pulling things, and couldn’t lift anything “heavy”.

It was hard following these rules as it was not painful to do some of these things and I therefore didn’t have that “ouch” moment to remind me I shouldn’t be doing something. At around two weeks post op I was sitting eating my cereal for breakfast and my husband asked how I had gotten the bowl out of the high cupboard in our kitchen. Whoops, even then I was reaching up unconsciously.

But there are some things I have definitely not been doing that I have enjoyed (in a sense) since last Thursday. The first being washing my own hair! What a hassle that has been, and it’s only been getting done about once a week when before I wouldn’t go two days without washing it. I’ve also been able to start wearing clothes that go on over my head again. No more stepping into tanktops or wearing button-up shirts! I’ve even enjoyed the mundane tasks of hanging washing on the clothes line and cleaning the shower screen in my bathroom.

Overall I have been feeling pretty good. I had a cold a couple of weeks ago and initially I was a little worried that the coughing was not great for my pectoral muscles as I was a little sore, but that only lasted a day or so and I realised it wouldn’t be an issue. Those muscles are tough!

The cold also got me thinking a lot about what medications I can take for a simple cold that will not interfere with the Tamoxifen. This is a whole new thing for me as I have never been on any serious medication before, but I am sure I will get my head around it all in time.

I seem to be doing well on the Tamoxifen so far. I’ve not had any significant side effects yet, so let’s hope it stays that way. I did think I was having some bone pain, but it was around about when I got my cold. I’ve also had some period-like cramps (with no period) a couple of times, but my body’s cycle is probably so messed up about now it doesn’t know what is going on. They only lasted for a few hours each time, so I think that will settle.

Now that all the swelling has gone down there is a distinct difference in the size and shape of my boobs – but really, until the implants are in, I have no idea what size and shape they are going to end up. It’s the same with the scars. They are relatively neat and thin, but really, it’s how they heal after the transfer surgery that matters. 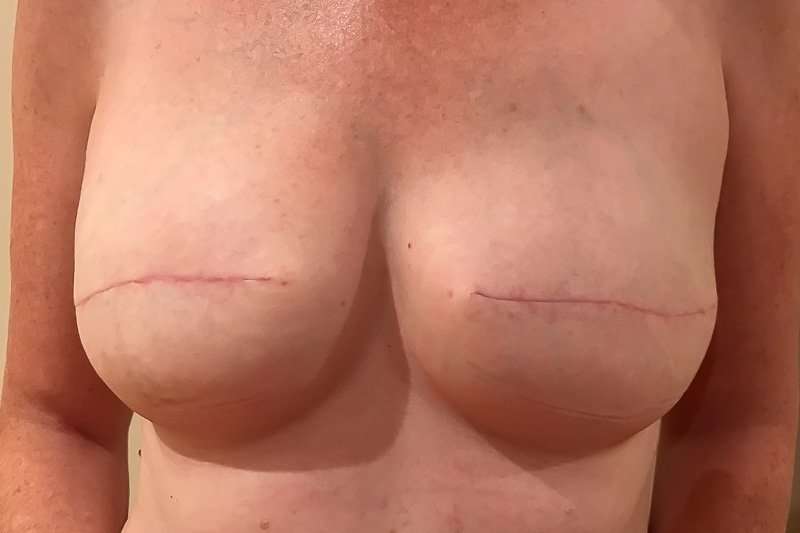 Another thing I have been easing off of is wearing the surgical bra. In fact, wearing any bra! Seriously, these new boobs do not move – I have even tried doing a short jog with no bra to test it out and nothing! It is so much more comfortable than wearing this surgical bra 24/7, but I am probably going to have to go back to doing that when I have the fill done.

Tomorrow I am off the get that first saline fill done. It’s supposed to be quite painful as the expnders stretches the pectoral muscle some more. I am expecting to lose some of the range of movement I have now and go back to feeling the pulling when I stretch or reach. I can also see a significant difference in my left and right sides, so I will need more saline in the left, so that could add to the pain. But hey, everyone has told me each of the steps is painful and so far I have been okay, so I’m sure I will get through this without too much difficultly too.

I have been so eager for this appointment – not just for the beginning of the next phase, but because I am desperately wanting my surgeon to clear me for travel. I have a couple of trips I would love to do in the next two months, one for pleasure, one for work, but I need to get my surgeon’s okay first. I’m all ready to come home from the appointment and get booking! That should definitley help me with any pain I am feeling 🙂