I had planned to give an update after my second expander fill, but the appointment was so quick and I didn’t really get any extra information from my surgeon so it didn’t seem worth it. Instead I am going to summarise both fills in this one post.

The second fill was done about ten days after the first one, only because I had to change the appointment day to suit everything else I was doing. I was only in the office for 5-10 minutes. I didn’t even sit in the chair and chat, it was straight to the bed to lay down and get the injections. Again I had 50ml in each side.

I did question my surgeon about the difference in the size of my boobs again. He took a brief look and said they aren’t too bad, that I didn’t need to worry and then did the fill. And that was my whole appointment.

Fill number three was two weeks after the second fill, and this time I was determined to get a little more information. I again brought up the unevenness of my boobs. I know it’s only a small thing in the grand scheme of things, but I figure I want to make sure I don’t end up with a result I am disappointed with. If they end up uneven but we have tried everything to sort it out then so be it, but if I didn’t say anything, I would always be thinking I should have been more proactive.

So he looked a little more closely this time and poked and prodded a bit. It turns out I have a small amount of lymphodema in my right (cancer) breast. This is caused by the lymph system not being able to flush fluids out as efficiently as it used to since I had three lymph nodes removed on that side. There seems to be around 50-70ml extra fluid floating around in that side which makes my boob look bigger. This all makes so much sense now that it has been identified.

Now that I know what is causing the extra swelling, I can do something about it! What that is going to be yet I don’t know. We are about to go away for two weeks, but when we get back I think I will try a session of lymphatic drainage massage and see how that goes. In the meantime I will try a little manual massage myself. Youtube has some good videos showing how. (Like this one if you are interested)

The fill was again 50ml in each side. I meant to ask how much he put in during the surgery so I could work out how much I’ve had in total, but I completely forgot. 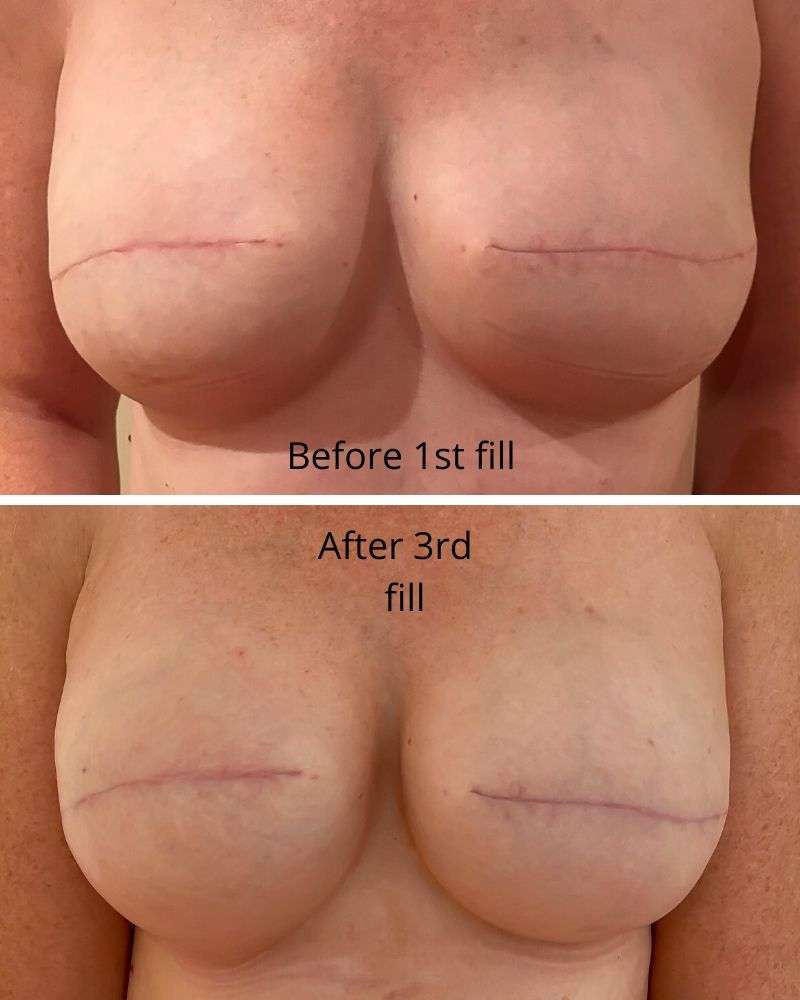 I then spent the rest of the appointment talking about the next step – the exchange surgery, where my expanders are removed and swapped for the implants.

My surgeon said I could have it done in six weeks from now, but I have chosen to wait a little longer and actually have it done in ten weeks time to work around some travel I have planned in April. He also had said I could wait as long as 18 months if I wanted too, but I do want to get this over and done with as soon as I can.

We again looked at and discussed the two different types of implants that are available to me. One is a micro-textured teardrop shaped implant, the other a smooth, round implant. When I first discussed reconstruction and looked at these same implants I was thinking I liked the more natural shape of the teardrop, even though there is an issue with some (not these) textured implants. Last year many textured implants were taken off the market because there is something like a 1 in 10000 chance of developing yet another form of cancer from them called anaplastic large cell lymphoma. (Further details here)

There are also another issue with the teardrop implants. There is a small chance they can turn in the body, thus the shape will be all weird. But one possible benefit is that they reduce the risk of capsular contraction, a condition where the body forms a hard shell around the implant and it has to be replaced. I say “possible” because while initially this is what textured implants were created for, recent studies have pointed to it making not a whole lot of difference, so who knows!

My initial reason for not liking the smooth round implants was the shape – I thought it would look too unnatural, but now that I am used to the round shape of the expanders, I kind of like it.

I also asked my surgeon which he would recommend for my body shape and size and he said the smooth round, so while I don’t have to make a final decision until I have my next appointment in six weeks time, I am thinking these are the ones I’ll go with.

There was only one other question I had about the exchange surgery – I am sure I’ll come up with plenty more before the next appointment – and it was if the surgery would be done through the same incision as before or if a new, smaller incision would be made under my breast as sometimes is done. My surgeon prefers to use the existing scar. I feel relieved that I won’t have another scar to add to my collection, but at the same time, I’m really pleased how well I am healing and hate to think all my effort is going to waste and I’m going to have to do it all again lol.

My surgeon did also comment that my skin was holding up really well to the expansion. Not that I expected anything different, but in some people the skin can become too stretched and thin which can cause issues. This can be a particular issue if people have had radiation, and it is for this reason often radiation and implants are not recommended together.

** Note – I am not a medical professional, and what I’ve said above is only my take on things. Please do your own research and speak with your own doctors.